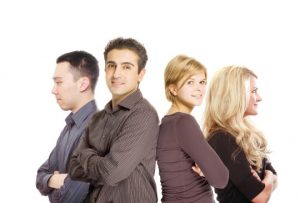 Here are 5 ways people behave in organizations that are the surest path to poor results and lack of accomplishment.   These behaviors are prevalent in most workplaces.  Ineffective leadership allows these behaviors to persist which can harm organizations and lead to lethargy, low morale and poor productivity in the workplace.

Holding discussions by email when face to face communication is needed and the failure to call a face to face meeting or even a video/teleconference call to test perceptions and to gather “free information” often conveyed in body language is a primary offense.  Effective leaders practice good communication which is the fundamental basis for establishing trust in an organization.  Communications that are secretive, vague or filled with innuendo, unprofessional and lacking purpose are symptoms of a poorly led organization.

Hierarchical organizations often have a set of unwritten rules that are not known by everyone yet are skillfully practiced by those in the organization fortunate enough to have a mentor or smart enough to figure them out.  Often those who are not knowledgeable about the set of rules that actually govern the organizational decision making and dictate how members advance are sidelined for being out of step by making a serious error or omission.  Organizational members who understand the dual systems but fail to acknowledge the importance of the unwritten rules are doomed to spinning their wheels.  Leaders are ineffective who ignore the reality of the unwritten rules and are not skillful in applying.  They may insist on following written procedures, while ignoring the reality of the workplace, to the detriment of the organization.  These leaders only serve to frustrate organizational members who value results and performance.

Conducting meetings that lack purpose, an agenda and clear goals is a sure way to deflate a team, waste time and sap productivity.  Eventually weak morale will stem from the display of a consistent lack of respect for employees’ time and the weak connection meetings have to productivity.  Over time poorly run meetings lead to poor attendance and lack of enthusiasm for participation.  Members cannot prepare for such meetings so their thinking is not focused on particular topics.  This opens up meetings to be chat or gripe sessions, depending on the topics that eventually meander the way onto the agenda.  Leaders that do not set agendas or plan effectively for meetings waste everyone’s time.  Since these meetings generally lack focus and direction, they also lack specific results desired, a timetable for completion of tasks or a discussion and agreement of responsibilities.  Add to this to the failure to distribute a timely record of the meeting so agreements can be promptly implemented.

There is nothing more irritating in organizations than the failure of team members and leaders to follow through on agreements to complete tasks in a timely way, no matter how big or small.  Leaders fail who do not have a way to monitor delegated or assumed tasks or hold members accountable.  Ineffective leaders are not be able to hold team members accountable because they have weak organizational skills and do not follow through on promises they make to the people they manage. The lack of perceived integrity influences team members who follow the poor example set by the leader.  Matrix organizations do not always have clear lines of authority so the management of delegated or assumed tasks can become a burdensome responsibility.  And follow up by default, a practice commonly used by most modern organizations results in the same 20% of the team members following up on 80% of the tasks.  When the time comes to offer rewards, the advancement will go to these individuals.

5. Whine and complain and lose focus.

Why do people whine? Because they are lacking leadership, structure, focus, direction, answers.  Simply put whiners and complainers do not have an appropriate channel to vent their inability to achieve effective understanding, acknowledgement of their contributions or their frustrations with the process.  When whining and complaining becomes the predominant method of communication in an organization – an ineffective leader is not far behind.  Whiners get mired in the doing of the tasks and are unable to step out routine way of doing things to seek solutions.  Leaders who do not facilitate positive communication are usually drawn into whining sessions because they tend to look outside of their team for solutions and resort to a blaming culture.  Leaders who are ineffective are blamers not doers and facilitate the whiny culture.  These leaders view themselves and their teams as victims of the system who are not empowered to make change because it falls outside of the status quo and they are risk adverse.