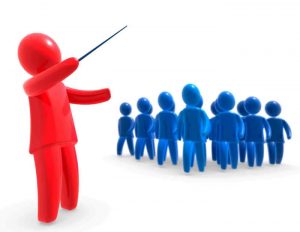 Leaders that bully and attack others and gain followers by fanning the flames of fear are not really leaders but are power mongers.  Power mongers are power seekers who are motivated by personal glory for their own gain.  They are the opposite of the humble leader who only wants the best for his or her followers. Power mongers who rise to be leaders ultimately fail.  Their tendency is to abuse their power or position.  Because this power is tied to this kind of leader’s personal gain, it is a weak form of power over followers and will eventually cause his or her undoing. Followers begin to defect or even sabotage these leaders.  Power mongers can be identified by their lack of diplomacy, tact and an attitude of “winning at any cost”.  We have seen this phenomenon repeat itself throughout history.  Can you think of any public figures current or past who fall into this category?

Eleanor Roosevelt once said, it is not fair to ask of others what you are unwilling to do yourself.  Global research has not only shown that people want leaders who are visionary, but want their leaders to have a strong moral compass and care about others more than themselves and demonstrate it by walking the talk.  The most effective leaders are hopeful, idealistic and positive putting the interests of those they serve ahead of their own.  They emulate the values they espouse.  Effective leaders are accountable for their actions, admit their shortcomings and accept responsibility for their mistakes and actions.  They do not blame others.  Whether we call them exemplary leaders, or “Level 5” leaders, most people would want to affiliate with leaders who bring out their best attributes, not their worst qualities.

Many people believe that we are going through a crisis of leadership.  We are only in crisis when we think of power mongers as leaders.  Power mongers are not true leaders.  Leaders who are positive and lead for the common good of others are the true leaders.